It is one of those moments when you set yourself into an amazing mood and put away all the winter gears ready to embrace summer and before you know it you are on the first flight all the way to winter.

On 27/4/2016 I felt like I was in a movie ( walking dead or some other Tv show where people are stranded scavenging for food and water).

The weather was terrible, I had been told by a friend that it was going to be bad but I had made plans to go and nothing was going to stop me.

When I said nothing, I didn’t think of snow….. I was in the range of some rain, some little breeze and some sun. We left Ljubljana the sun was off and on, I carried my little umbrella, put on a simple sweater and some leggings, simple Spring shoes but before I left the house I grabbed a court for just in case.

It was a little chilly but ok until we got to Gorenjska. The rains were so cold but still no thought of snow at all, we were keeping positive. It was starting to snow as we emerged out of the longer tunnel, still positive though. When we got to Villach it was really snowing, had no choice but to look for museums or galleries.

The nightmare started immediately we got out of the car. We didn’t have the right shoes nor clothes. Our feet were soaked in water and freezing, some roads were closed to the places we were to go, and we decided to return home.

It was still early and why not come all the way from Austria and have lunch in Italy. We looked at the weather forecast this time and it was not amazingly shining, but it was not snowing.

The wheels were heading there and we were excited. 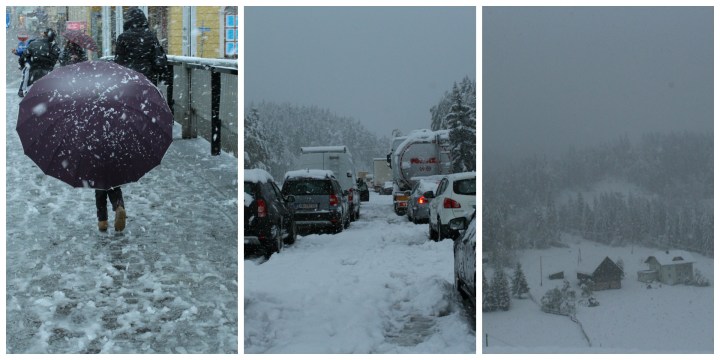 The first 2 hours of being stuck on a highway we’re not so bad, we were still warm, ate the sandwiches we had and played the games we knew. It went to 4,5,6,7 hours and we were starving and cold.

The stranded I knew is not even close to the one I had on a highway. The next time someone tells me is stranded on a highway during winter,  I will have to drop everything and listen attentively. There is no chance of going back, branching off, going to the bathroom, accessing anything to eat or drink.

This might sound funny if you have not been in that situation but trust me if you are going to drive on any highway, be prepared with what to eat, drink and some things to keep you warm. Carry a book or your computer and do some work.

Besides being hungry, my head was spinning with possibilities. In Uganda, we do not have a motor way, and we tend to have one paved road connecting cities. So if a truck is stuck or an accident occurs, there is little to do but to wait a little or may be for a whole day or night.

Here on the other hand, every road is paved and even if it might take you longer than on a highway, I bet it’s better than being in one place for more than 7 hours. There must be emergency exits on a highway, but how far are they from each other? I know this is not my place to suggest something, but there is a rail in the middle of the motor way separating the coming and the going.

That is one of the ways that can control waiting, if that rail had some parts of emergency, that if there  is an accident, they can unscrew the ramp and direct cars in a certain direction as necessary,  giving time to those clearing the road to work without pressure and those waiting not to be so agitated in my opinion.

It is still Spring according to calendar, we don’t want tourists to think that they booked for a spring journey and got winter instead. It won’t hurt to pack something warmer though when you are traveling this side, the weather might just choose to surprise you.

As always, pick some few phrases of Slovene.